It’s a hot afternoon in Ataasi Nkwanta, in the Ashanti region in Southern Ghana. Beads of sweat are trickling down the head of Ernest Anokye, the operations director of a small sawmill called Sir Charles Company Limited.

“It never used to be this hot this time of the year,” says Anokye. “It’s getting hotter every year! But things are changing around here. Recently, our community planted trees to create shade and stop droughts. People are increasingly aware of the benefits of forests in the fight against climate change.”

It’s not just the tropical heat that is making Anokye sweat. In his office are several officers from Ghana’s Timber Validation Department. They are here for a routine audit, to make sure Sir Charles Company Limited complies with relevant laws and regulations.

“We usually first check if all the paperwork is in order” says Frank Ankomah, Head of the Regional Audit Unit of Ghana’s Timber Validation Department. “Businesses need to have a proper business licence, pay their taxes and have updated records of materials along their timber supply chain. We also look at the operations, to make sure there is a safe working environment, that no illegal timber is used in the business, or other illegal practices.”

The checks that Ankomah and his team conduct are part of a wider ongoing effort in Ghana to improve the governance of the forest sector, and safeguard the long-term survival of the country’s forests. 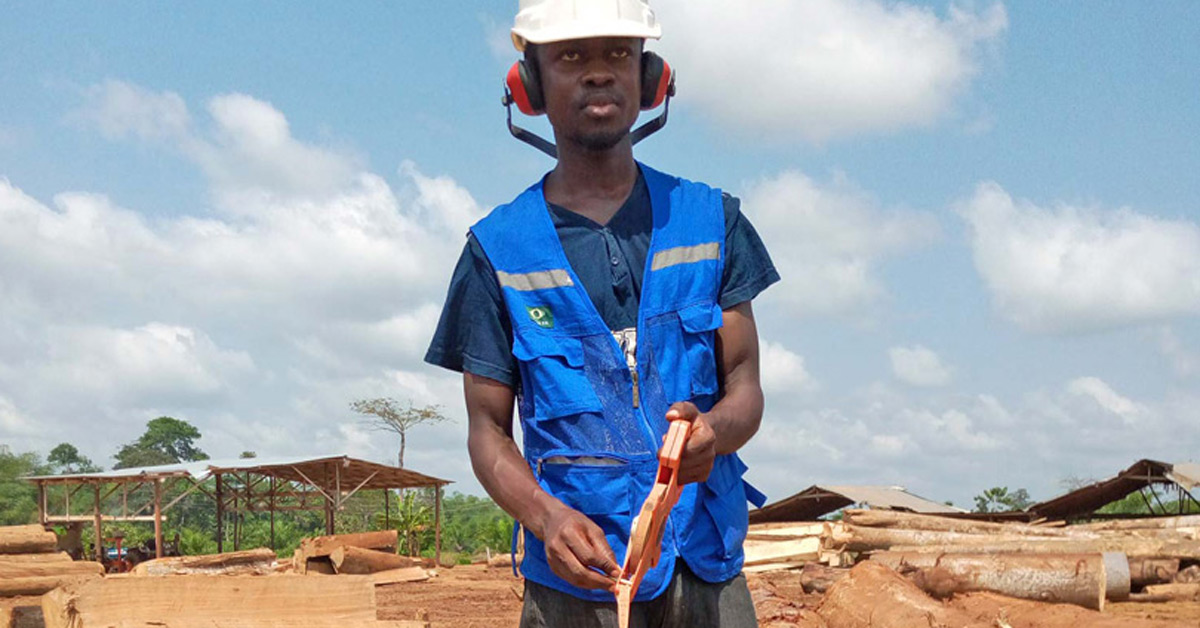 Joseph Sackey is equipped with legally required helmet and ear protections. The Ghana VPA has enhanced enforcement of health and safety requirements in forestry operations.

In 2007, the country started negotiating a Voluntary Partnership Agreement with the European Union. The aim of the Agreement is to improve forest governance, address illegal logging and promote trade in legal timber products. Negotiations concluded in 2009. Since then, the country has been implementing the Agreement.

This meant a country-wide overhaul of the forest sector, developing new laws and procedures, as well as a digital system that tracks wood from the forest, through companies that process the timber into final products and export them.

“Since the first audit of the company in 2011, the business practices have improved. I learn from the auditors, who inform me of the regulations in force, and of any changes in the legal framework. With the implementation of the VPA, the government cracked down on people who were selling illegally-logged timber. And also told us that we would be fined or lose our licence if we bought it” says Anokye, the operations director.

He now makes sure that he buys timber that is harvested legally. He does so by checking barcodes on the products. The company that sells him timber has been assigned a part of the forest that they can log. They cut a predetermined amount of trees, after which they clean up after themselves, making sure the forest can grow again sustainably. The trees they take are all marked with unique numbers, to make sure they can be identified during process, transport and when they are sold on international markets. But it’s not only what happens in the forest that is important.

“I always welcome the guys from the Timber Validation Department and the other auditors that come to carry out checks on my company. I have nothing to fear from them.” 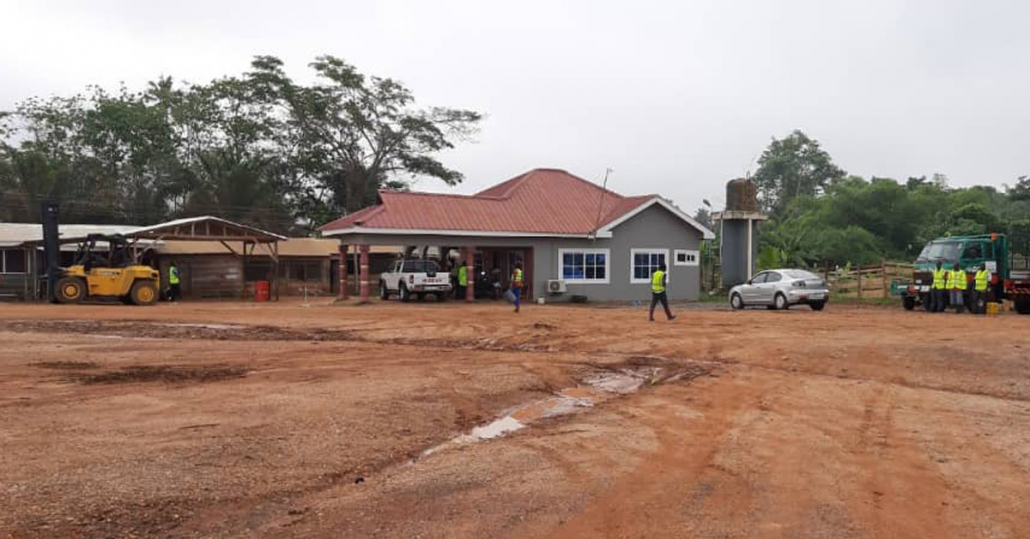 “The inspectors also check the factory. Aside from the paperwork, they also inspect the factory floor,” he says. “They examine the machinery, making sure that workers have the right safety equipment, and that there are no safety hazards.”

The company’s employees have witnessed this change over recent years.

“We used to work in our sandals, but Mr. Anokye made sure that we have the right equipment. We now wear safety shoes, gloves, goggles and face masks,” says Joseph Sackey, an employee who has been with the company for over five years. “We also received training about the health risks that we were facing. And now, if we see something dangerous happening, it’s easy for us to recognise it and do something about it. Nobody gets hurt anymore.”

Ankomah, the inspector from Ghana’s Forestry Commission confirms this. “There have been tremendous improvements in the way things are done, with clear changes on the factory floors. Not only from managers and owners, but also from the employees themselves”, Ankomah says.

“But we still find issues, often related to companies that only operate on the domestic market. This is mainly because there is less scrutiny from their buyers. Regulatory controls on the domestic market are not stringent enough, but it is a situation the VPA process is gradually improving on.”

“As employees’ awareness increases, they realise what’s in for them. They realise it’s their health that’s at stake, their income,” he explains. “The VPA process has brought greater transparency and accountability. It has led people to realise that illegalities will be detected and punished. It has had a deterrent effect and companies have become more responsible, either pushed by enforcement from our side, the Forestry Commission, or by their employees demanding better treatment.”

“The VPA process has led the timber sector in our country to make major strides,” says Obed Owusu-Addai. “We can see how law enforcement has dramatically picked up. Companies that are exporting are making particularly noticeable improvements, in particular in relation to environmental and social obligations. However, we still have to be vigilant so that companies that operate domestically adhere to the same standards, as it’s in everyone’s interest to safeguard our country’s precious resources.” 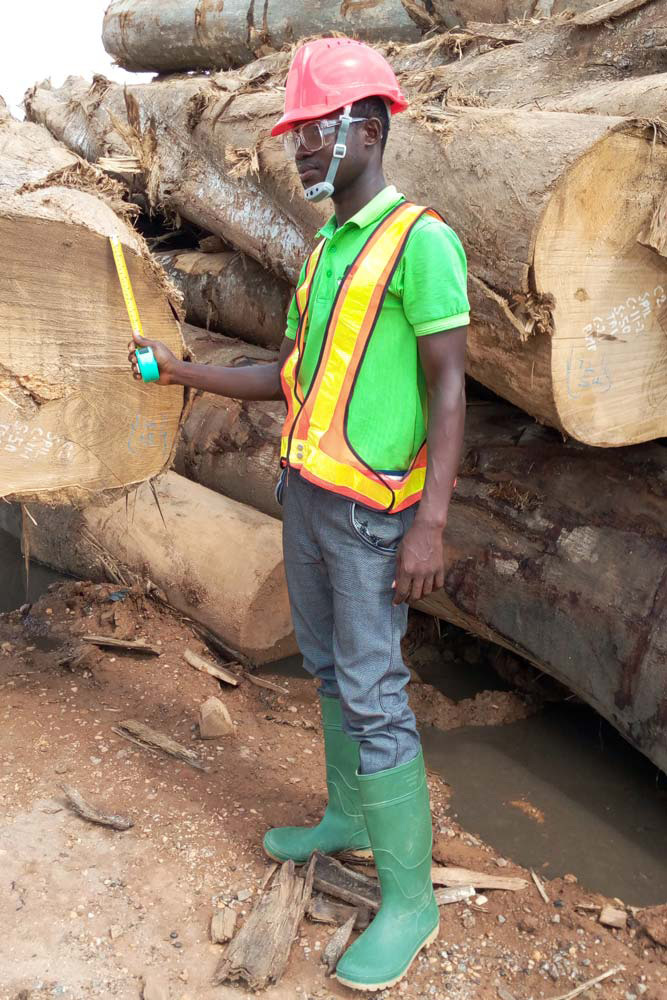 Joseph Sackey, employee at Sir Charles Company Limited, measures the diameter of the logs to check that the timber is legal. Logs below a certain size cannot be harvested according to the laws of Ghana and as provided in the Ghana VPA.