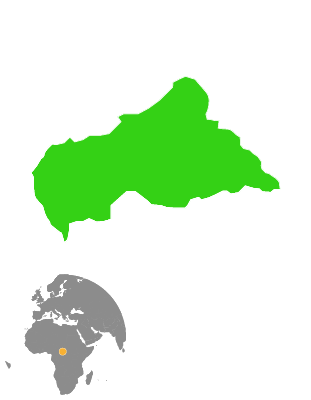 Since 1984, and with the support of the EU, and France in particular, the Central African Republic has made considerable efforts to promote the sustainable management of forest in the southwest of the country and eradicate illegal logging.

As a result, over the past two decades, the Central African Republic has established sustainable forest management plans for all of the forest area allocated for exploitation. The country has also set up a verification unit, outsourced to an external body, to confirm that timber products exported are adequately registered and that taxes have been paid to the Government. The VPA complements these efforts by introducing a robust and systematic approach to verifying all aspects of timber legality.

A Voluntary Partnership Agreement (VPA) is a legally binding trade agreement between the EU and a timber-exporting country outside the EU. A VPA aims to ensure that all timber and timber products destined for the EU market from a partner country comply with the laws of that country.

In addition to promoting trade in legal timber, VPAs address the causes of illegality by improving forest governance and law enforcement. A major strength of VPAs is that they look beyond trade to consider development and environmental issues.

Stakeholders in Government, the private sector and civil society develop VPAs through a participatory process. A VPA is therefore a vehicle for addressing the needs of different stakeholders and for including many people who have never before had a voice in decision making.

VPAs are a key component of the EU Forest Law Enforcement, Governance and Trade (FLEGT) Action Plan of 2003. The Central African Republic is one of six tropical countries that have ratified and are implementing VPAs. Nine more are negotiating VPAs with the EU, while others have expressed interest in negotiating a VPA.

A VPA partner country that has implemented a timber legality assurance system and other VPA commitments can issue verified legal timber products with FLEGT licences. The advantage is that FLEGT-licensed products automatically meet the requirements of the EU Timber Regulation (EUTR), which prohibits EU operators from placing illegally harvested timber and timber products on the EU market.

The EUTR entered into force in 2013. It requires EU operators to perform due diligence checks to ensure the timber products they place on the EU market are legal. FLEGT-licensed timber meets the due diligence requirements under the EUTR.

While FLEGT licensing is an important goal, it is not the end point of a VPA process. Governance reforms, legislative and policy reforms, impact monitoring, improvements to the timber legality assurance system and other activities continue.

Through progress on VPAs, implementation of the EU Timber Regulation and dialogues with other important timber markets, including China, the EU and the VPA partner countries are contributing to a growing global movement to address trade in illegal timber and timber products. Australia, the US and Japan are also seeking to restrict the placing of illegal timber on their markets. The process to achieve FLEGT licences may therefore help VPA partner countries such as the Central African Republic meet the legality requirements of markets beyond the EU.

The Central African Republic and the EU negotiated the terms of the VPA through a cooperative process: both parties share the goals of eliminating illegality and fostering good forest governance.

VPA negotiations started in 2009. The negotiations involved representatives of Central African Republic civil society organisations, the private sector, and Government ministries and agencies. As a result, significant national ownership and stakeholder engagement were achieved and the VPA reflects a broad consensus among stakeholders.

The Central African Republic and the EU signed the VPA in 2011 and ratified it in 2012. They are now implementing the commitments laid out in the VPA text and annexes.

The Central African Republic commits to developing a timber legality assurance system so it can issue FLEGT licences to verified legal timber products it exports to the EU. The system will not cover the domestic market.

Once the timber legality assurance system is operational, the Central African Republic commits to export to the EU only FLEGT-licensed timber products.

The timber legality assurance system, governance reforms and other commitments are described in the VPA’s main text and annexes. In addition to the agreed commitments, the VPA process itself has fostered multi-stakeholder participation, transparency, legislative clarity, legal reforms and other aspects of good governance (see How the Central African Republic-EU VPA has improved forest governance).

A Central African Republic-EU Joint Implementation Committee oversees implementation of the VPA. Records of discussions are made public. At the national level, the Ministry of Water, Forests, Hunting and Fishing has created the Permanent Technical Secretariat to coordinate VPA implementation.

Between 2012 and 2016, a political and military crisis affected the Central African Republic and disrupted VPA implementation. Since democratic elections in 2016, stability has been returning. This has led to renewed VPA momentum and the resumption of implementation of the legality assurance system.

How the Central African Republic-EU VPA has improved forest governance

The Central African Republic-EU VPA has already had an impact, both as a result of what the Central African Republic and the EU have committed to, and as a result of the multi-stakeholder process of negotiating and implementing the Agreement. In addition to the agreed commitments, the VPA process itself has fostered multi-stakeholder participation, transparency, legislative clarity, legal reforms and other aspects of good governance.

The level of stakeholder participation in the VPA process is unprecedented. During the VPA negotiations, representatives of civil society and the private sector participated alongside Government in the national VPA steering committee. The stakeholder groups are also represented in the national multistakeholder implementation committee (Comité national de la mise en oeuvre et suivi – CNMOS) and the Central African Republic-EU Joint Implementation Committee.

The VPA process has strengthened the capacity of Government, the private sector and civil society stakeholders to work together to address illegality in the Central African Republic forest sector. Capacity building has included training to enable civil society groups to organise themselves into a platform that can contribute to discussions on the forest sector and beyond, such as consultations around a new constitution.

An annex to the VPA lists the information the Government of the Central African Republic commits to disclose to the public. The stakeholder platforms and multi-stakeholder committees established during the VPA process enhance communication and allow all actors to request information.

The VPA process has clarified the meaning of legality in the forest sector in the Central African Republic. The VPA legality definition makes clear what operators in the timber sector must do to comply with the law, and the indicators and verification measures public authorities must use to assess legality. The clear legality definition makes it easier for Government bodies to enforce the law and for the justice system to take appropriate action in cases of illegality.

The timber legality assurance system clearly outlines the roles and responsibilities of all Government bodies and their staff, making them accountable for enforcing the law.

To implement the timber legality assurance system, the ministry responsible for forestry will need to guarantee that it can undertake all the verification required by the VPA legality definition. The ministry will need to allocate staff and equipment, to develop procedures to ensure a systematic approach to verifying legality and to set up communication channels to make verification information available. A new programme to support this implementation phase is underway, supported by the Food and Agriculture Organization of the United Nations (FAO) for the period 2020-2023.

When a joint Central African Republic-EU evaluation concludes that the timber legality assurance system is fully operational as described in the VPA, the Joint Implementation Committee can propose that the Central African Republic begins to issue FLEGT licences. Once the decision to commence FLEGT licensing has been made, the parties will follow their respective internal processes, including legislative measures, such as amending the FLEGT Regulation on the EU side.

The European Commission has appointed the International Tropical Timber Organization (ITTO) as the independent market monitor for all VPA countries. ITTO will assess the trade in timber products between the Central African Republic and the EU, and the impacts of FLEGT licensing on this trade.