You are here: Home1 / Central African Republic stories2 / Collaboration in CAR for transparency in the forest sector: civil society...

Collaboration in CAR for transparency in the forest sector: civil society and the public administration work together

The Central African Republic is amongst the poorest countries on the planet, and its population has been faced with violence and conflict for several years. Despite the fragile nature of the security and humanitarian situation, which still plagues the country, recent positive developments within the forest sector could be the precursor to a transition towards good governance.

‘Access to information is made extremely easy for us. Upon our request, logging companies provide us with all the documents we ask for straight away,’ praises Josias Ndewa Zeneth, Independent Observer and Project Leader at the NGO Centre for Environmental and Sustainable Development Information, upon returning from a series of field visits. These visits took place within the framework of a mandated independent observation project, operationalised in 2016. Proposed by the Platform of Central American Civil Society Organisations for the Sustainable Management of Natural Resources, the mandated observation project aims to improve transparency and the monitoring of activities within the forest sector.

In 2003, the European Union (EU) launched an Action Plan on Forest Law Enforcement, Governance and Trade (FLEGT), which aims to provide support to producing countries in driving increased law enforcement, control and governance. The Central African mandated observation project forms part of the actions initiated within the framework of this Action Plan. This project, which has involved various field visits since May 2017, is supported by the FLEGT Programme of the Food and Agriculture Organization of the United Nations, which is financed by the EU. By involving members of the civil society and Government officials, the project has triggered a revival of confidence and credibility within the sector. According to Luc Gomanga, the head of the forest guard brigade that conducted the field visits, the project marks a real ‘synergy between the Government and civil society to control how the forests are managed.’

“The forest guards are already keen to return to the forests, they are conscious of the need to raise awareness among the population and timber companies on sustainable forest management.”

In 2012, the Central African Republic negotiated and ratified a Voluntary Partnership Agreement (VPA) with the EU as part of the EU FLEGT Action Plan. While the Agreement is not yet operationalised, its negotiation and the efforts made to implement it have already contributed to the promotion of good governance within the forest sector. Nevertheless, such efforts were paralysed during the conflict that took place between 2013 and 2015. A coup gave rise to a three-year period of political instability, during which forest concession activities were threatened by armed groups, notably the Seleka coalition. It was only between 2015 and 2016, following presidential elections that took place under the auspices of the United Nations, that constitutional order was reinstated. At present, although conflict continues in the north of the Central African Republic, relative security has been restored in the south-west, where the exploited forests are located. This has enabled the resumption of activities within the forest sector and of efforts to improve its governance.

The mandated observation project is part of the FLEGT initiatives that are currently being deployed throughout the country and has several benefits. By conducting field visits to forest concessions, the project will have the deterrent effect of documenting possible offences and punish them if necessary.

According to Josias Ndewa Zeneth, the FLEGT process is ‘key to claiming loud and clear whether the forest legal framework has been respected or not.’ He adds that the forthcoming reports of the independent observation project, which will be made public at the end of its 15-month term, will be a key incentive for timber companies to ensure that they are complying with the legal and regulatory framework.

According to Luc Gomanga, field visits are ‘essential to guarantee the traceability of timber.’ He adds that the visits gave the forest guards the opportunity to discuss practices that are detrimental to sustainable forest management with timber companies, as well as gain an insight into land restrictions on logging activity, and to plan various reforms with stakeholders. 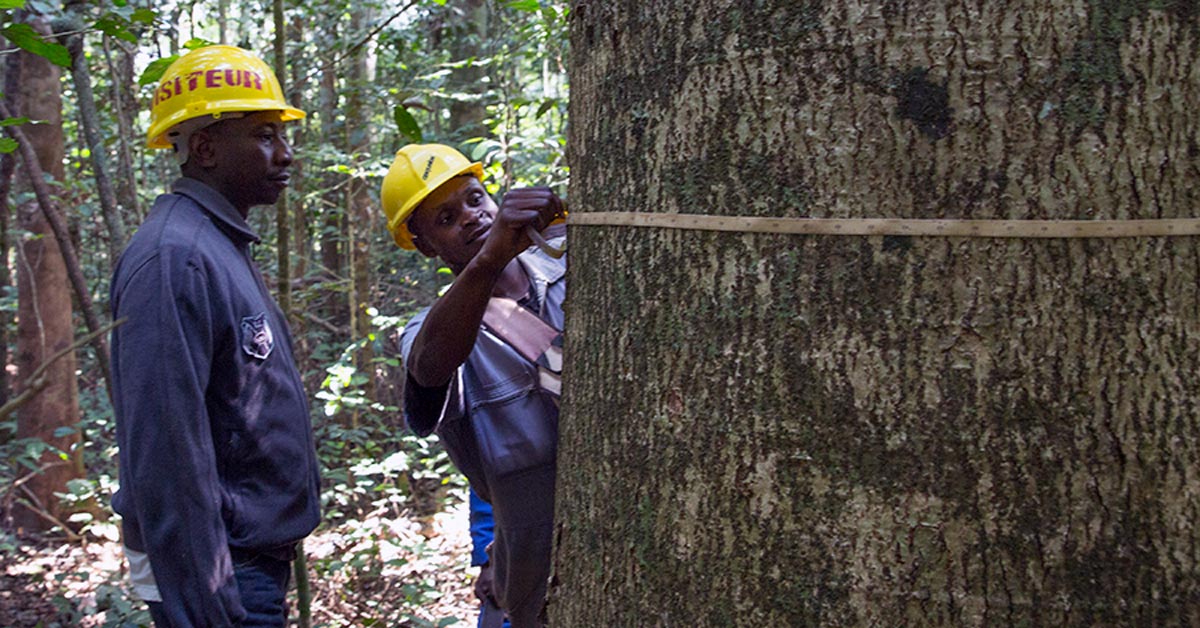 The field trips organised within the framework of the project have reawaken the taste of the forest guards to travel to the country’s forest concessions, where they had not been since 2009 due to political circumstances. Luc Gomanga reports that the forest guards who participated in the initial field visits returned ‘very satisfied’ with the hands-on training, which will allow them to regain control over what’s really going on in the forests. ‘The forest guards are already keen to return to the forests,’ he states. ‘They are conscious of the need to raise awareness among the population and timber companies on sustainable forest management.’

Nevertheless, there is still room for improvement if the objectives of the project are to be fully achieved. The field visits could be better prepared, and all the stakeholders agree that their length of ten days is too short, taking into consideration the long distances to be travelled and the state of the roads, especially during the rainy season.

The implementation of the mandated observation project marked a turning point in restoring confidence within the sector. However, there is still a long way to go for Central Africans to reinforce the credibility of their forestry sector, one of the key pillars of their economy. Various upcoming initiatives should contribute to this end. One can mention the future implementation of the timber legality assurance system; the launch of a community forest management pilot project with local communities and indigenous peoples; the support for management improvements at the forest ministry; and the renewed investments in the upgrade of industrial facilities.